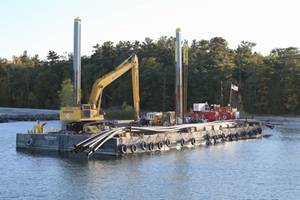 The submarine electric cable linking the island to the Door County mainland failed several months ago as a result of what later examination confirmed were repeated incidents over multiple years, with abrasive contacts grinding the cable between lake ice and the rocky bottom until the cumulative damage caused it to fail.

Co-op personnel—Washington Island Electric Cooperative has only four employees—restored service with emergency generating equipment within about half an hour. But the work of replacing the damaged cable to provide a permanent power supply was completed only last month after fabrication of a new cable, transportation from the East-Coast manufacturer by ultra-heavy truck, and installation across a less ice-threatened route, all at a cost exceeding $4 million.

With fewer than 900 members to share the expense, Washington Island Electric turned to its local state legislators and the Governor’s office to find out what help might be available. Thursday, they learned Governor Evers would include a $2 million appropriation—half in each year of his proposed biennial budget—to help finance the island’s recovery.

The pledge came by way of a letter to Evers, formally requesting the budget remedy after weeks of conversations involving the co-op, the legislators, the statewide cooperative association, and the Governor’s office.

“Washington Island has been through a lot over the last eight months and it is certainly reassuring to know that our elected officials are willing to work together to make things happen for their constituents who are in a tight place,” said Washington Island Electric Cooperative Manager Robert Cornell on learning of the budget plan.


The Wisconsin Electric Cooperative Association (WECA) is a statewide trade association providing a variety of services including government relations, education and training, and communications for its membership of 24 electric distribution cooperatives and one generation and transmission cooperative, whose co-op member-owners reside in Wisconsin, Illinois, upper Michigan, Iowa, and Minnesota.