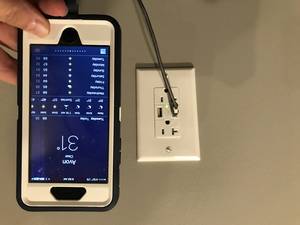 The chargers that came with our phone, digital camera or other electronics seem to disappear as often as a sock mate sometimes.

As a solution, many people reach for the low-cost, generic plug-in USB chargers and charging cables found in the sea of impulse items that flank the check-out line at your favorite drug, convenience or big-box store. They’re also popular items on numerous online shopping sites and cheaper than dishing out money to replace them with their original maker’s versions.

It can save money and it’s so convenient, you rationalize. Without much more thought, in the virtual cart or on the counter it goes.

Inexpensive charging components may be one area you don’t want to cut corners on, however, for a variety of reasons. Amazon recalled 26,000 AmazonBasics portable lithium-ion battery chargers and power banks after the massive online retailer learned the units can overheat and ignite, causing fire and burn hazards. According to the U.S. Consumer Safety Product Commission, the products were sold between December 2014 and July 2017.

Along with being a potential fire hazard, using cheaply made charging components and devices can also cause electrocution. Dangers aside, they may cost you more in the long run since they can cause damage to whatever’s on the other end of the cable.

The bottom line is this: Don’t buy charging equipment with prices that seem too good to be true or from companies you’ve never heard of. And even if you’ve heard of the company, be leery of fakes. In 2016, Apple sued a company that sold counterfeit wall chargers with Apple’s name on them for less than $10 each.

Say yes to the Milky Way in the check-out line or to the online Kindle book and no to cheap chargers.