The group covers how cooperatives differ from investor-owned utilities, and the benefits to members because of cooperation among co-ops. They also discuss energy generation and reliability, the new CHARGE EV network for electric vehicle charging at cooperatives, and bringing broadband to cooperative members.

This podcast is the third in a series profiling the structure of different utility types. The first two covered investor-owned and municipal utilities.

You can listen to episode 30 of the Electric Wire podcast, “Getting to Know Wisconsin’s Electric Cooperatives,” wherever you get your podcasts, or listen and watch on the CFC YouTube channel here:  https://youtu.be/sUjZS7wfNq4

December 6, 2022—Megan Wagner of Oconto Electric Cooperative, Emma Steinke of Rock Energy Cooperative, and Cicely Kiecker of Chippewa Valley Electric Cooperative took first, second, and third place, respectively, in WECA’s 202 essay contest, open to students who attended the 2022 Youth Leadership Congress. Students were asked to describe the Second Cooperative Principle and what it means to them and their community. 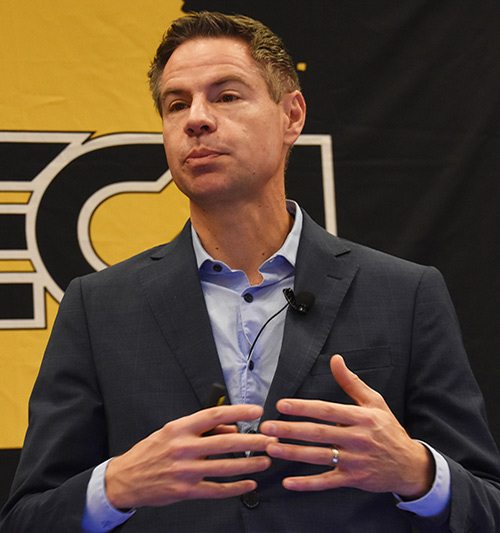 November 15–16, 2022—WECA’s annual meeting took place in Stevens Point this week, with what was potentially the largest attendance in history. According to WECA Director of Education and Events Wendy Fassbind, 164 co-op leaders representing all of Wisconsin’s electric cooperatives gathered for two days of presentations and
discussion about the issues impacting the industry on November 15–16, 2022. “This is the largest meeting ever that I can remember, and that goes back 20 years,” Fassbind said.

The conference kicked off with a candid and unfiltered presentation by environmentalist and investigative journalist Michael Shellenberger, who is also a best-selling author and Time Magazine’s “Hero of the Environment.” Shellenberger, whose books include San Fransicko: Why Progressives Ruin Cities and Apocalypse Never: Why Environmental Alarmism Hurts Us All, presented comprehensive data that debunks widespread messaging about catastrophic global warming.

“You'll never find this out if you read the mainstream news media, but global carbon emissions were actually slightly declined over the last decade,” Shellenberger said. “Mostly that was a transition from coal to natural gas, which produces half the carbon emissions as coal… The number of people who died from natural disasters has been going down for over 100 years, even as the population has quadrupled. There's been no increase in the
frequency of hurricanes globally, and in fact, there's been a slight decline in hurricanes that have hit land in the United States.” 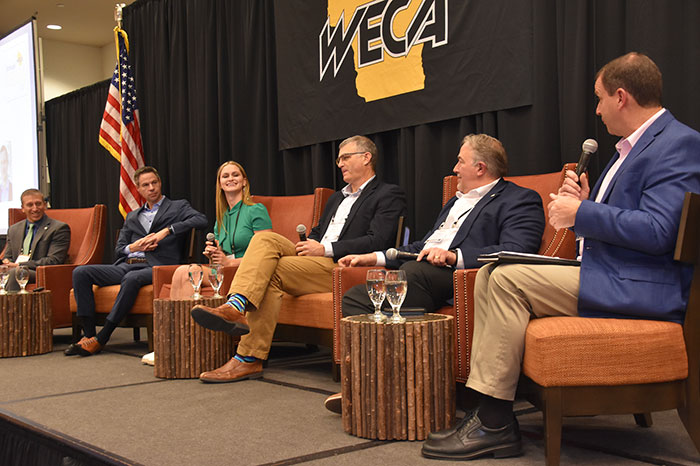 The annual meeting also included a presentation by Federated Rural Insurance Exchange Account Executive Keith Johnson on the status of the insurance claims and funds, and a presentation by RESCO President and CEO Matt Brandrup, who gave an update on supply-chain challenges.

According to Brandup, RESCO has been able to temper the extreme price increases on equipment such as transformers, so Wisconsin electric cooperatives are not taking as big of a hit as other utilities. Still, he said the number of price increases from their supplier in 2021 and 2022 has been “unheard of,” with six increases last year and four this year. The good news, Brandrup said, is they have much greater allotments expected from ERMCO for 2023, which should relieve some of the supply-chain pressure.

WECA Vice President of Operations Tim Clay presented the manager’s report, including a review of how the organization is taking on major challenges including third-party ownership of solar installations, and he thanked the WECA staff for stepping up in the absence of WECA President and CEO Steve Freese, who has been on medical leave since his cancer diagnosis in June. Board Chair David Hischke echoed that sentiment and presented the chairman’s report saying, “What a year this has been."

Hischke talked about the plan to purchase a building in Middleton to house the WECA headquarters, and the expected savings it will bring. WECA board Secretary-Treasurer Roger Wiff presented on the financial stability of the organization.

Freese made an appearance at the meeting to accept a special ACE award (see below) and recorded this message for attendees: https://vimeo.com/769649644/19739c716e

Chair of WECA’s Resolutions Committee Jennifer Beaudette presented two new resolutions and one amendment to a resolution, related to beneficial electrification (amendment), rural broadband, and closure of generation plants. There was also a new proposed amendment relating to the development of hydroelectric power. All proposals were passed.

Wisconsin Realtors Association Director of Political and Governmental Affairs Joe Murray broke down the recent midterm election with a discussion about why the expected “red wave” did not happen and how Wisconsin’s political landscape is shaping up.

WECA’s Director of Government Relations Rob Richard talked about the importance of ACRE and how the committee determines which political candidates to support. 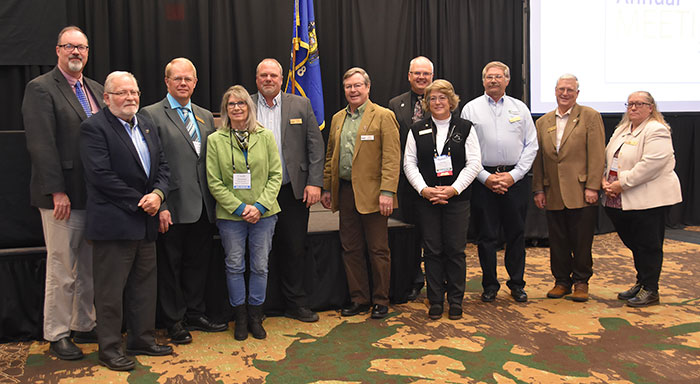 The board members are: 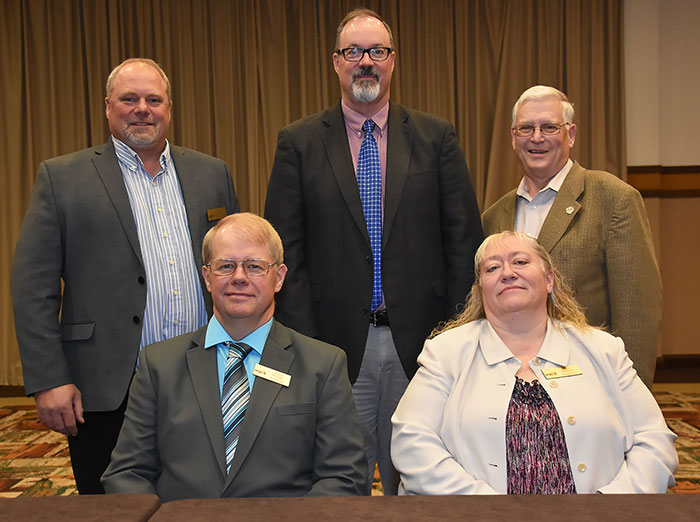 At the annual meeting, WECA honored Jerry Sorenson, whose term is up in 2023 and does not plan to run again, and Joe Metro, who also did not run for another term, for their service on the board. 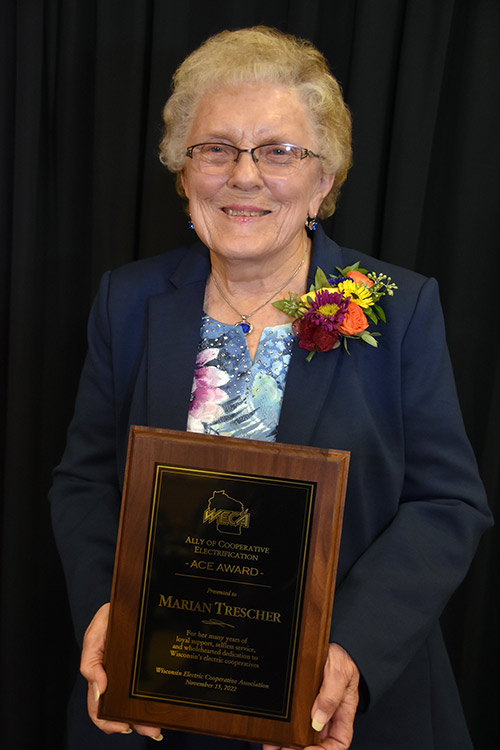 The projection screen read, “And though she be but little, she is fierce,” as Rock Energy CEO Shane Larson presented Marian Trescher with the 2022 Ally of Cooperative Electrification (ACE) award, and it could not have been more fitting. Trescher is a lifelong public servant whose commitment to community has had an exceptional impact on the electric cooperative world and beyond.

“I am so honored to be only the second woman to receive this award,” Trescher said to a round of applause from the audience, which included four granddaughters. 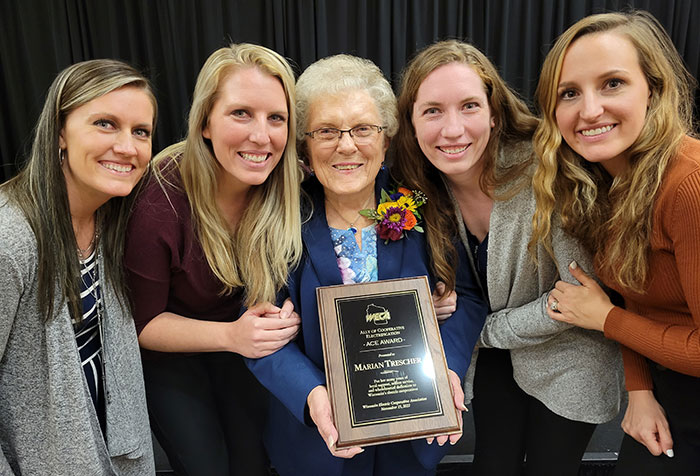 Trescher, ran for the Rock Energy Cooperative board seat held by her husband Howard in 2004, after he passed away. During his 43 years as a director, Marian was always by his side, supporting the cooperative. In 2011, she was elected board secretary and has received many certifications and served on the Federated Youth Board and WECA Education Committee. In her remarks, Trescher recalled launching Rock’s “cooperative queen” program, and traveling the country when their representative won the state and national titles. 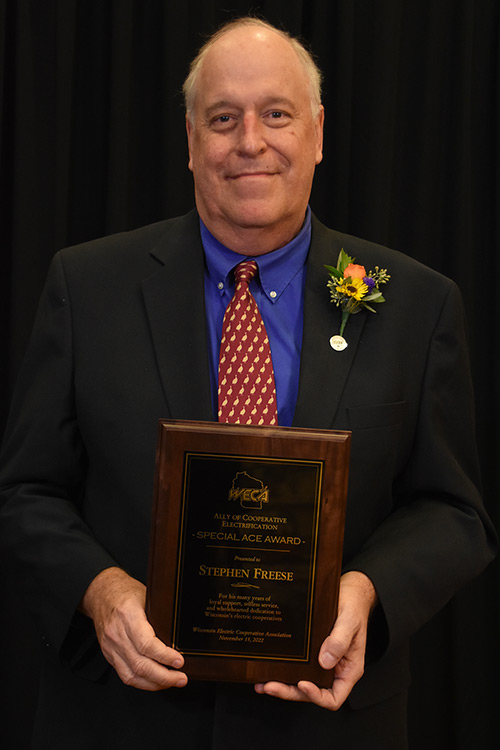 Many members were happy to see Steve Freese, president & CEO of the Wisconsin Electric Cooperative Association (WECA), attend in person to accept the special Ally of Cooperative Electrification (ACE) Award. Freese thanked the WECA staff and all members for their continued support. “Your calls, messages, cards, and emails mean more than you know,” he said. “And your prayers and the medicine are working.” Freese hopes to be back in the office in January.

Freese has also demonstrated a lifelong commitment to community serving in local and state government, he is also credited with securing the financial stability of Circus World Museum in Baraboo when he took over as leader there in 2007. Freese also served as chief administrative officer of the Wisconsin Farm Bureau Federation Cooperative before
joining Cooperative Network as vice president in 2015, where WECA was then a division. Freese was tasked with the daunting challenge of re-establishing the statewide as a stand-alone organization after being part of Cooperative Network for 20 years.

David Paudler, Riverland Energy Cooperative board president and then WECA chairman, said, “Even in times when Steve placed his future at risk, he always advocated for our best interests. His dedication and hard work resulted in the momentum that became WECA’s renewal and this will always be part of his legacy.” 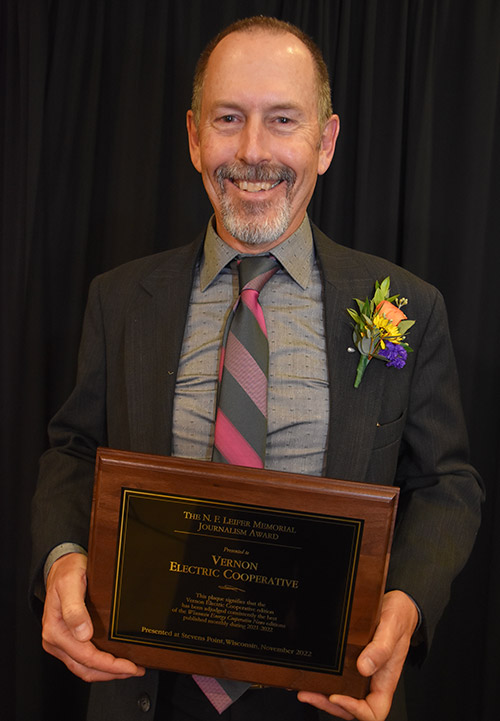 This is the fifth Leifer Award Vernon Electric has won since this publication first began offering awards for excellence in 1966, and the third such honor to be earned on Maxwell’s watch. In addition, the co-op has won multiple category awards, particularly in the area of human interest. 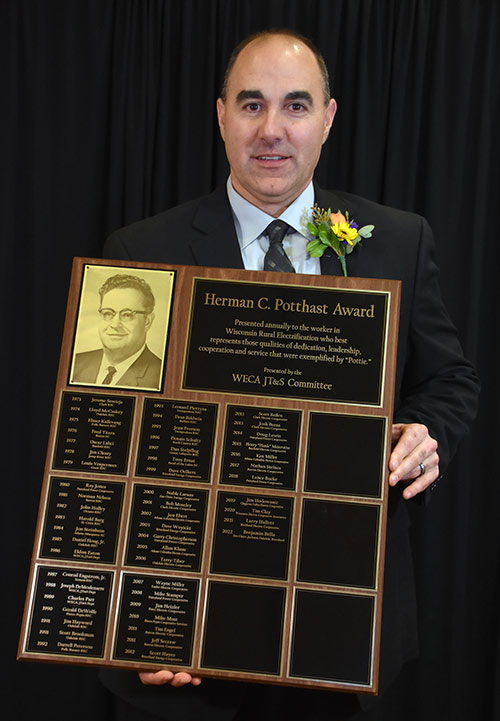 Ben Bella, safety & loss control manager, accepted the 2022 Potthast Award for his commitment and dedication to safety in the electric cooperative field. Bella has served in this role for more than 12 years, graduating from NRECA’s Management Internship Program in 2017 and earning NRECA’s Loss Control Certificate in 2012.

WHAT GOES AROUND COMES AROUND 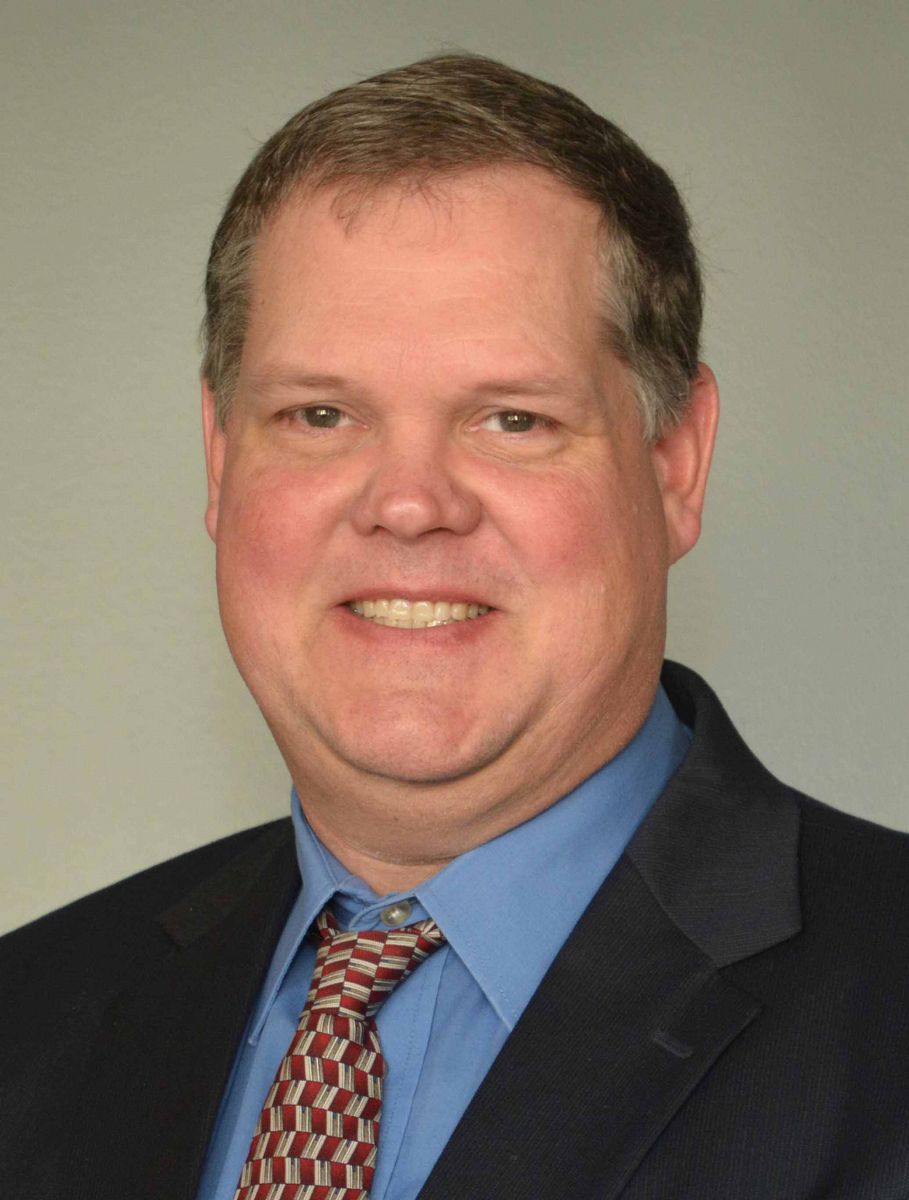 This month’s “Message from the CEO” is guest commentary from Tim Clay, WECA vice president of operations. WECA President and CEO Steve Freese is currently on medical leave.

Whether it was straight-line winds or a tornado this past summer, the damage was severe and took my power out for most of the week. Yet, a short distance away, my co-op’s linemen—joined by crews from Jackson Electric Cooperative—were working to clear twisted trees, replace broken electric poles, and repair powerlines to restore service to a community they had likely never visited before. 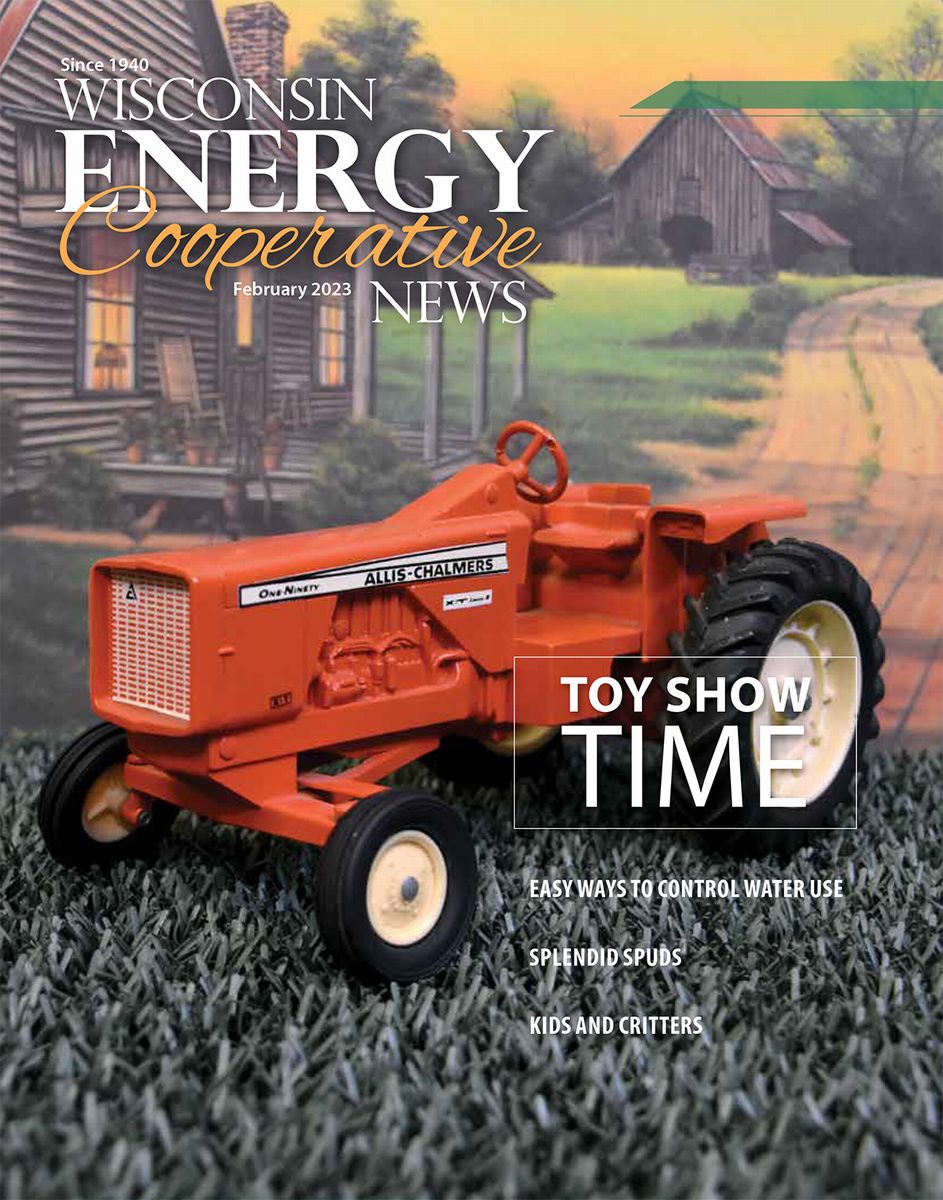